Atom interferometry exploits the wave-like nature of atoms by sending atomic wavepackets along two different paths and detecting their interference when they recombine. Atom interferometers have been used in testing Einstein’s equivalence principle; measuring Newton's gravitational constant and the fine structure constant, and in many other precision tests of fundamental physics.

In an interferometer, a longer time of flight results in a larger phase shift when atoms are subjected to a force. This leads to better contrast in the data, and therefore a more sensitive measurement of the force. This has led to a push for extremely large atom interferometer setups (such as ~10-meter fountains), although with long times arises increased systematic errors, such as vibrations and drifts as the atoms travel along the paths. In addition, only one data point can be obtained each time the atoms travel through the interferometer, which can lead to slow accumulation of data.

Continuous measurement would circumvent these problems. To interrogate atoms continuously, we are building our atom interferometer inside an optical lattice. An optical lattice is a standing wave of light, which can be made by a pair of counter-propagating laser beams or by sending resonant light into an optical cavity. After the atoms are laser cooled and captured by a magneto-optical trap (MOT), they will fall into the wells of the standing wave due to the dipole forces from the light on the atoms. When the atoms are in this periodic potential and feel a constant force, they exhibit Bloch oscillations, which causes them to oscillate with a frequency proportional to the applied force. Instead of waiting for atoms to follow a long interferometry path which can take approximately a second, the atoms will be oscillating back and forth in a micrometer sized optical well at a rate of thousands of times per second.

This novel experiment will be used to search for physics beyond the Standard Model by looking for unexpected forces on the atoms. The setup will be especially sensitive to time-varying forces due to the rapid measurement rate. We will be able to test a variety of theoretical predictions for the nature of dark energy and dark matter, in particular focusing on a theory of dark energy which produces a so-called chameleon force. 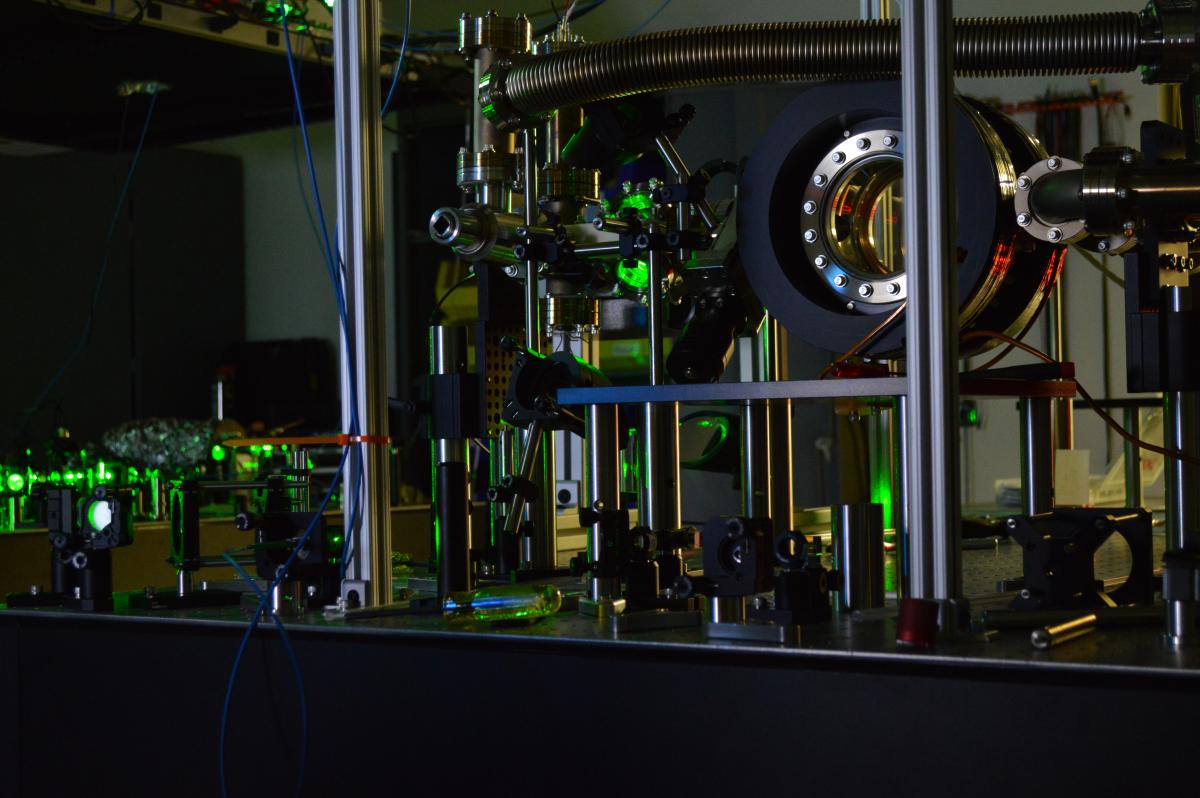 Watch a movie about our experiment!

Atom interferometers can be excellent rotation sensors by taking advantage of the Sagnac interferometer setup, which causes the rotational velocity to be proportional to the phase shift between two paths that enclose an area. As the system rotates, the atoms moving in the same direction as the rotation take longer to get to the detection zone, as it is rotating away from them. The atoms moving against the rotation hit the detection zone after travelling a shorter path. The difference in path lengths leads to a phase shift when the two paths are interfered. This phase shift is linearly proportional to both the energy of the particles and the enclosed area. Using atoms instead of the usual photons increases the energy dramatically: mc2 ~ GeV for atoms, hν ~ eV for photons; on the other hand, it is more difficult to keep atoms coherent over large distances, which limits the enclosed area.

This experiment will used trapped atomic ions which have extremely long coherence times and can stay trapped for days, compared to neutral atoms which are difficult to keep trapped for even one second. In addition, using trapped ions allows not only spin-dependent velocity kicks (delivered by photons), but also position-space kicks with electric fields. The trap allows the area of the system to be small while still producing a large phase shift as the ions can circle around the trap center many times before interfering. Eventually the device size may be scaled down for use in vehicles as an alternative to GPS navigation.

Optical magnetometers (OMags) are sensitive to spin dynamics of particles, and can be used to probe beyond-the-standard-model physics, including theories for dark matter and dark energy. Our rubidium cell OMag will be part of a global network of synchronized OMags (the Global Network of Optical Magnetometers for Exotic physics, GNOME). Having multiple OMags at different locations around the Earth allow us to look for correlations in the small signals that could be exotic physics, such as the passing of a dark matter domain wall or oscillating dark matter fields. Axions are one of the many dark matter candidates, and depending on conditions of the early universe, could either be a background field which is oscillating in time or be separated into domains whose boundaries could sweep through the Earth. If the field couples to the rubidium atoms’ spin, then the magnetometers would all pick up a signal.